Recently the QRC House became the Sir Eion Edgar House. The driving force and visionary founder behind QRC, it is an honour to represent everything he stood for. “Matching the building with his name synergies quality and appropriately connects him with the college that he founded and proudly supported” – Charlie Phillips. 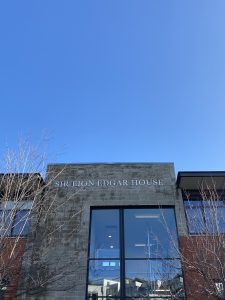 Find out more about the name change from the Mountain Scene below;

“Seventeen years after it opened, Queenstown Resort College’s Coronation Drive building has been given a new name, in honour of the man who founded it.

Ahead of last Friday’s QRC graduation, at which about 120 students graduated with diplomas in either hospitality or adventure tourism management, graduate diplomas in tourism and hospitality management and, for the first time, certificates in leadership and performance, QRC House was renamed Sir Eion Edgar House.

QRC boss Charlie Phillips says the college wanted to do something to honour him and had a few ideas, but renaming the flagship building rose to the top of the heap.

‘‘It matches a quality building with a quality person,’’ he says.

Jan, Lady Edgar, and one of her sons, Adam, was at Friday’s graduation representing the family.

She tells Mountain Scene the building’s new name is ‘‘lovely’’.

‘‘I’m sure Eion would be absolutely thrilled with it.

‘‘He’d be proud of the school, and the area, and the way it promotes Queenstown — it’s really good for Queenstown to have something like this.

‘‘He was very thrilled with the staff under the leadership of Charlie.’’

Adam says his dad ‘‘loved education’’ and he’d be proud as punch to see his name on the building.

Sir Eion, an accomplished businessman and philanthropist, was University of Otago chancellor from 1999 till 2003, and was awarded an honourary doctorate in law from the university.

Included in a host of honours, he was made a distinguished companion of the New Zealand Order of Merit in the 2003 Queen’s Birthday
Honours for services to education, business and sport.

Traditionally, he would dish out words of wisdom to graduates as they entered the workforce with their new qualifications — last week, Phillips did that in Sir Eion’s memory”.