Queenstown – the birthplace of adventure tourism 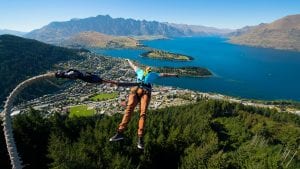 The Queenstown Lakes region has always been a magnet for adventurers and entrepreneurs and these pioneers became the mainstay of its adventure tourism industry. World-first innovations such as commercial jet boating and bungy jumping have forged Queenstown’s enduring reputation as the adventure capital of the world.

Visitors have been flocking to Queenstown since the 1860s when gold was first discovered in the Shotover River. When the gold finally ran out some years later many of those early prospectors decided to stay, captivated by the beauty of the surrounding mountains and rivers.

Around the turn of the century, it was the region’s many walking trails and tracks which first created the early beginnings of the tourism industry. People would come from around New Zealand and other parts of the world during the summer months to experience the magnificent walks, including the Milford, the Routeburn and the Hollyford Tracks, which have become famous in their own right. In winter though, Queenstown virtually came to a standstill as locals hibernated until the start of the summer walking season.

Over time, as better roads and facilities were developed, the town became a picturesque overnight stop for coach tours to Milford Sound, known as one of the seven natural wonders of the world.

In 1947, Sir Henry Wigley, of the New Zealand tourism and transport operator Mount Cook Group, showed the foresight he was famous for by opening a commercial ski area at Coronet Peak, thus developing Queenstown into a year-round resort.

Sir William Hamilton (who later developed the modern jet boat) was called upon and used technical knowledge, determination, and more than a smattering of good old Kiwi ingenuity to build a rope tow for Coronet Peak from scratch. The final concoction of driving drums, pulley trains, sprockets and other obscure parts were bought together and the ski area was born.

With good access, reliable snow and a nearby airport, skiers flocked to Queenstown and it became a thriving winter ski resort, prompting new development and the construction of several new hotels.

Queenstown’s first real taste of adventure tourism came with the establishment of commercial jet boating in 1960. The jet boat, a New Zealand invention, had just been developed by South Island high country farmer Bill Hamilton who had long been prevented from accessing many areas of his property due to the shallow braided rivers. The extensive manoeuvrability of the boat and its ability to travel in less than 3cm of water allowed for obvious commercial applications to be developed in a place like Queenstown and before long Kawarau Jet and Shotover Jet had established a thrilling ride taking visitors through the spectacular canyons on the Shotover River.

White water rafting was to follow quickly on the heels of the success of jet boating with Kon Tiki Raft trips, as it was then called, starting New Zealand’s first commercial rafting in 1974. The two nearby rivers the Shotover and the Kawarau were ideal for giving visitors a taste of the thrills and spills of this new activity and it wasn’t long before new operators were scrambling to keep up with the demand.

AJ and Henry, who met years earlier while skiing in Wanaka, had spent several years developing and testing bungy cords with the help of Auckland University scientists.  After extensive testing, a series of extreme jumps were made, first in Tignes, France, from a ski area gondola 91m above the snow.  To launch the new phenomenon commercially, and show their complete faith in the new system, AJ Hackett jumped from the Eiffel Tower in June 1987, making headlines around the world.

During their first day of commercial operations on 12 November 1988, 28 people paid $75 each to leap off the 43-metre Kawarau Bridge with a bungy cord attached to their ankles.  It wasn’t long before visitors were flocking to Queenstown in their thousands to experience the new adventure activity that everyone was talking about.  And so the global bungy phenomenon was born!

Today, some 1.5 million people have bungy jumped in Queenstown alone and more than 150,000 challenge themselves every year at one of AJ Hackett Bungy New Zealand’s nine innovative Bungy, Swing, Climb and Walk experiences across Queenstown and Auckland.

The wave of interest in adventure tourism created an environment for a host of other activity operators to follow, earning Queenstown a reputation as ‘the adventure capital of the world’.

Tandem Paragliding was also pioneered in Queenstown by the late Bruce Grant, an Olympic skier, mountaineer and extreme adventurer. It involved attaching a passenger to the pilot and running off the edge of a mountain with the canopy rising above, creating a sensation like a bird gliding to earth. Paragliding has become so popular that it’s now an iconic sight in downtown Queenstown to see dozens of canopies a day floating off Bob’s Peak.

NZONE Skydive became New Zealand’s first operator to commence commercial tandem skydiving in 1990 and the first to introduce freefall photography. The company now employs over 200 personnel across its three operations, including Skydive Wanaka and Skydive Southern Alps, and more than 350,000 people have experienced the multi award-winning thrill.

Other innovators and entrepreneurs have followed in the wake of these early pioneers and Queenstown now offers a huge range of adventures from ziplining, parasailing and canyoning to abseiling, kite skiing and surfing.